A Letter to a friend.

The last time we spoke I mentioned a certain piece of music I had recently heard on a recording and you immediately responded in what I took to be a rather flat voice, ” Daniel Barenboim’s 50th anniversary concert”. [1.]  From the tone of your voice I gathered, perhaps incorrectly, that you  were not enamored with this recording. I can understand your reservations. But as we were speaking long-long distance, we had tno time to explore musical subtitles and as well, we had children and grandchildren to Moo about.

Recently I’ve had time to ruminate on Barenboim’s recording and other great artists recorded in front of live audiences. These ruminations and a long silence between us, are the reasons for this letter.

From the beginning, Barenboim’s interpretations ranged from interesting and sublime to  overwrought, sometimes beyond the pale of performances typically heard today. My first reaction to this recording was that Barenboim, appearing in triumph before a home town crowd as a prodigal son, had decided to unleash his impromtu passion and willingness to take chances, to create joy, as only an interpretive genius can.  His heart on his sleeve, he just took flight. Perhaps it was this flight that unsettled you.

The  Mozart Sonata K 330,  was played with the traditional rubatos, but others were added. Overall, they were larger, surprising and delightful. I prefer over all the 1957 Clara Haskil live recording.[2.]  Barenboim plays the second movement slower, giving it more gravitas.  The Beethoven, Op. 57, ‘Appassionata’ really sets out the difference between romantic  Barenboim and the classic Clara Haskil. Barenboim’s use of the sustain pedal blurred many of the lines I so love to hear in this sonata. If you wish to hear the clarity of Horowitz, hear every note virtuosity at any speed, check out the live  Vienna piano recital of Lang Lang.[3.]

Remember, this is only an assumption on my part, I could agree with your lack of enthusiasm for Barenboim’s recording. Some of the following shorter pieces lack luster, with one exception being the second Scarlatti Sonata. But I beg you to seriously consider his performances beginning with the Chopin  Nocturne, Op. 27, No. 2., Db Major. When I first heard this I was stunned. Here was something definitive. A clarity of emotion, a direct path to the heart, that one rarely experiences either in person or on recordings. There is no room here for a contrived thought. This is fingers improvising without touching. Barenboim must have been outside himself, I certainly was.

For lovers of the sublime, Chopin’s Nocturne begins the final  and most thrilling part of Barenboim’s recital. His performances of José Resta’s Bailesito, Ginastera’s  Danza de la moza donosa and Villa-Lobos’ Polichiinelle are visceral. Ginastera’s  Danza reminds me very much of the Chopin nocturne with its gentle left-hand opening, nostalgia in the melody, the grandiose middle and the return with its unexpected yet perfect strokes.

Well dear  M. I’ll bring this message to an end by saying how much I am enjoying music history. As a student I started working forward somewhere around J. S. Bach and ended up playing Takemitsu. Now I’m going backwards.  Some of my findings have been discussed in earlier postings.  My latest discovery, some scholars refer to him as the West’s first composer, is Guillaume Machaut. As a friend  recently pointed out, the quality of performances of early music has increased considerably since David Munrow began his crusades in the early to late 60s.  The CD [4.] is titled Mon Chant Vous Envoy and there are seven performers, singers and instrumentalists. His music requires a revaluation of what is old and what is new.  Midway through this elegantly package and wonderfully performed CD, there appeared a work that stopped me in my tracks.

One more piece of music I feel compelled to mention, I’m sure you know it, is another sublime work in the Chopin, Ginastera, Machaut realm.  Schubert’s Die Nacht for male chorus. My version was conducted by Robert Shaw and recorded in France by Telarc. It is the first of six songs under the heading Evensong. If I should die before I wake  .  .  .

Please give my love to R and R, T, A and all the young ones, Gute Nacht.

In early 2015, a spate of high quality concerts rarely seen in Toronto, began with the Art of Time Ensemble. On the stage of Harbourfront Centre Theatre, they presented music by Lou Reed, interpreted by some of Canada’s finest arrangers, instrumentalists and singers. Art of Time Ensemble is the creation of its artistic director, pianist Andrew Burashko, a passionate and informed communicator with a love for music that stretches far beyond the borders commonly thought to demarcate music categories.

Andrew’s programs are based on themes. For a 2013 programme titled Franz Schubert, Source and Inspiration, composers of Jazz and Art music were commissioned to arrange for voice and ensemble, a theme from Franz Shubert’s
Piano Trio No. 2 in Eb Major. The trio was played first and then the arrangements were performed by five singers, Carol Pope (Rough Trade), Andy Maize (Skydigers), Gregory Hoskins, John Southworth and Danny Michel.

Andrew often commissions Toronto arrangers, a diverse group of superlative musicians who, though relatively unknown to the general public, never fail to astonish audiences with their ability to bring fresh perspectives to popular war horses. Fortunately, Art of Time is recording many of their pearls.

An Art of Time programme titled What is Sacred, began with Arvo Part’s Stabat Mater, followed by three superb arrangements of songs with religious themes: Wayfaring Stranger, arranged by Gavin Bryars; Pilgrim; and You Are Not Alone. After intermission, Olivier Messiaen’s Louange A L’Eternite De Jesus from his Quartet for the End of Time, and a medley of African American spirituals and Oscar Peterson’s Hymn to Freedom were sung, revival style, by Jackie Richardson.

The evening closed with a beautifully subtle and complex interweaving of six female dancers, choreographed by David Earle to the Miserere by Gregorio Allegri (1582-1652).  The Miserere was hauntingly sung by Choir 21 as they stood like angels in the first balcony, sending heavenward Allegri’s plea. All this was much too sublime to be followed by anything else.

Attempts to merge art forms have been vulnerable to dismissal by purists or outright failure in the public marketplace. But Andrew does not merge art forms. He respects their individuallity and his classical discipline protects them from being mistreated. An idea must pass through a stringent artistic filter before it blossoms on an Art of Time stage.

In the twenty years from 1970 to 1990, a few elite ensembles, devoted to mostly white western art music, received the majority of government money. Toronto ensembles have favoured repertoire from one of roughly five established genres of westrn art music: opera, ballet, symphony, choral and chamber. They must submit mission statements in order to be eligible for government funding. These statements put them into a bureaucratic niche that can obligate them to a particular repertoire.

In the the 1990s government arts agencies began to realign their financial priorities in response to social and political pressures, gradually achieving more balanced funding by region and favouring emerging composers, pop music, First Nations musicians, and other minority groups. Each re-allocation made the financial pie  smaller, dramatically reducing art music budgets. The recent economic down turn exacerbated a feeling of uncertainty within the arts community. Some ensembles reduced the number and frequency of their concerts, limited or re-directed their programme choices, greatly reduced the fees paid to musicians and began exploring ways to work with other ensembles.

In conjunction with his many artistic friends, Andrew is creating fresh concert experiences for traditional Toronto audiences while attracting new concert goers, young and old, hip and staid. The effect this generational blend has on audiences is immediately apparent. As one takes a seat for an Art of Time concert, there is a frisson in the air rarely felt in other venues. So far Andrew has avoided the malady of uncertainty afflicting other Toronto arts organizations. His large and ever growing audience, aided by a group of faithful collaborators and sponsors, portends a long and healthy future. Andrew’s unique artistic love affair has captured the imaginations of artists and concert goers. Concerts by Art of Time Ensemble have become one of Toronto’s most popular sources of art entertainment.

I encourage readers of this article to visit Art of Time Ensemble web site for a complete list of its programmes, artists and videos.

Posted by robinengelman on May 1, 2015 in Commentaries & Critiques, Contemporary Music, Unassigned 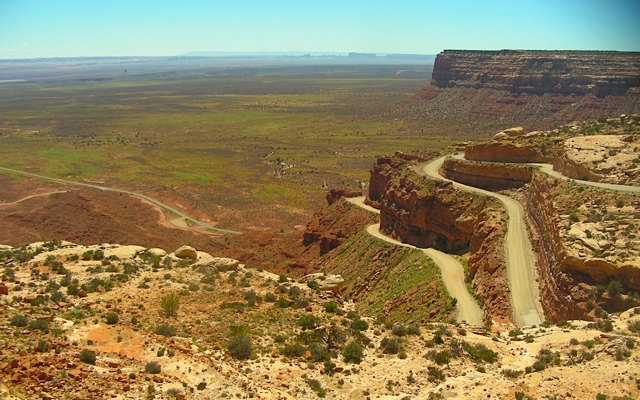 Last night I attended a memorable concert of new music. One work, a duet for violin and percussion by composer Linda Catlin Smith, titled Dirt Road, was performed by violinist Sandy Baron and percussionist Rick Sacks. Calgary born, Ms. Baron has played in the Canadian Opera Company Orchestra for 19 years. During the summer months she plays with the Santa Fe, New Mexico Opera Company and when not in the pit, she drives around New Mexico’s outback photographing desert landscapes intersected by the dirt roads she travels in her 1971 vintage Ford blue and white pick up. When Ms. Baron returns to Toronto, the pick up is left to winter in the south-west.

With Sandy to one side and Rick to the other, Dirt Road (2006-15) was performed in front of Array Music’s new, very large and very clear rear projection screen upon which Baron’s lonesome dirt road photographs appeared in and out in an approprately slow accompaniment to the music. Dirt Road was written in 15 movements, any number to be played in any order. It is one hour long and occasionally I began to fidgit. My lack of control aside, the work was mesmerizing. Linda’s Dirt Road is generally quiet and slow. It demands patience, nuanced control and a lyrical, expressive sound. [2.] All these were provided by Ms. Baron.

Rick Sacks played vibrphone, large gong, four cymbals, triangle, glockenspiel and bass drum. On the whole, these were played sparingly as accompaniments to the violin. The vibraphone part was difficult, frequently four mallets, closely voiced and not easily memorized. The solo percussion movement, placed about mid-way, was a highlight. Many non pitch percussion instruments produce short or unanalyzable sounds, or both. In order to bridge the inherent silences or distractions created by these anomalies, a listener must retain sounds in order to attach them to the next. Rick’s phrasing provided the necessary continuity and the movement hung in space. Ms. Baron’s solo violin movement was a melodic gift, elegant yet casually proffered. A judiciously rendered foil to the percussion sounds. For me, these two movements formed the works apex.

The concert was pretty well sold out and even with my poor peepers, I saw John Beckwith, Kathleen McMorrow, Henry Kucharzyk, Adele Armin, Beverley and Austin Clarkson.

The Mokee Dugway is located on Utah Route 261 just north of Mexican Hat, UT. It was constructed in 1958 by Texas Zinc, a mining company. The three miles of unpaved, switchbacks descend 1100 feet from the top of Cedar Mesa from where the photograph above was taken.

The term “mokee” is derived from the Spanish word moqui, which was a general term used by the 18th century Spanish explorers and settlers in this region to describe the Pueblo Indians they encountered and the vanished culture which had left behind the numerous ruins they discovered during their travels.

Today the standard term used to describe these prehistoric Native Americans, who lived in this region more than 1000 years ago, is “ancestral Puebloans”. It is based on present day Puebloan tribes and archaeologists believe these people were the ancestors of the today’s Hopi, Zuni, Acoma and Rio Grande region cultures. You may also see them commonly referred to as the “Anasazi”, a Navajo word meaning “enemy ancestors”. note by Sandy Baron, edited by R.E.


[2.] I hope one day a recording is made of Blue Sky (2006) a percussion quintet Linda wrote for Nexus.  In my opinion, percussion repertoire would be enhanced by its inclusion. It is an aesthetic experience percussionists have for too long been deprived.