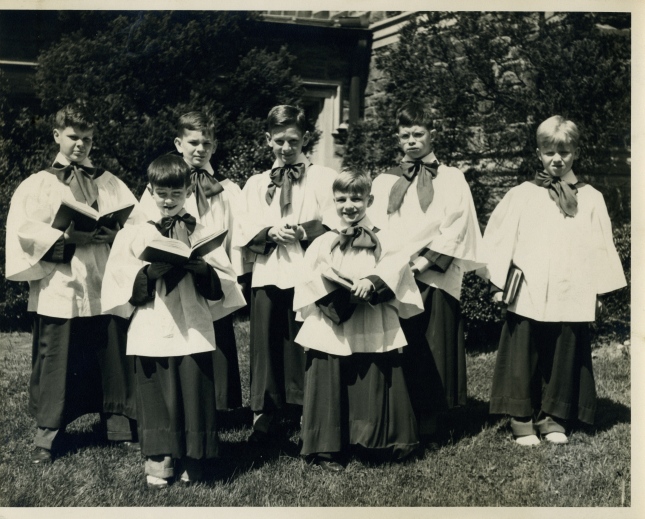 While discussing over drinks the subtleties of triangle playing, Seiji Ozawa remarked, “Percussionists have to sing”.

My first experience with music was probably singing. Whether it was me singing in a choir or hearing vocal music, I’m no longer sure. I do remember an LP recording arriving in the mail. It was created by Fred Waring and his Pennsylvanians. (People from my generation will remember this group.)

Waring’s arrangers had set words to the music of Tchaikovsky’s ballet “Nutcracker”. “Hark to the sound of the balalaikas, Hark to the shouts of the merry crowd, etc.”

I played that vinyl recording over and over and over until I had memorized the entire set of songs. The recording was still in pretty good shape until one day I left it sitting on a windowsill without  its sleeve. Returning home from school, I found the sun had shaped the vinyl into a wave band.

I was crushed. But luckily the weight of the old tone arms was enough to keep its needle in the grooves, at least until it got close to the centre.  All this took place either just before or just after I joined my neighbourhood church choir.

I couldn’t read music, but I had a quick ear and in a short time grasped the fact that the distance between notes on a staff was related to the distance up or down in pitch. Using this visual crib, I became a pretty good sight reader and the boy soprano soloist.  According to my Mother, I regularly made the older women in our congregation cry, but I was not aware of my powers at the time.

The highlight of every  season was a gigantic Christmas Eve service. Our organist and music director Edward Choate O’Dell [1.] always  hired a string quartet, a brass quintet, two harpists and Timpanist Dr. William Sebastian Hart –  all instrumentalists from the Baltimore Symphony Orchestra.

There were of course the adult choirs and a choir of 30 song flutes. Two huge Christmas trees decorated entirely in white stood guard on either side of the chancel. A professional soprano raised our souls, but nothing could compare with “Hark the Herald Angels Sing” performed en mass, a  trumpet soaring in a descant worthy of “Lucy in the Sky With Diamonds”, a thousand voices singing what they knew, Timpani a roar, and then Odell’s final gut crushing cadence with 30 foot bass stops akimbo. “Oh Lord, I give up!”

I had a few good years. However, after an altercation with a new minister, I walked across the street and began singing in another church choir. That choir was directed by a man who also directed a choir in a high Episcopalian church in downtown Baltimore. He asked me to sing in the choir and just a few months after leaving one church I found myself in another.

But the buzz was gone. Now through occasional fogs of incense I was singing Latin instead of Luther.  I hadn’t a clue about the meaning of the words and somehow monody just didn’t do it for me.

However, all these vocal experiences stood me in good stead. The first time I played the orchestral suite to the Nutcracker ballet, Fred Waring and his Pennsylvanians were in my head. As I played the wonderful tambourine part to Trepak, I was singing “Hark to the sound of the balalaikas, Hark to the shouts of the merry crowd, who dance and sing till the rafters ring and click their feet to the pounding beat.”

Making music couldn’t be much easier.

[1.]  Edward Odell gave a large party at his home just prior to one of our Christmas services and I attended with my mother. He owned one of the famous Baltimore brownstones, houses more thin than wide, but very deep and tall.  O’Dell’s living and dining room displayed glass cases filled with precious objects of Art. I can only imagine now what they were worth. But at the back of the 1st floor was his bedroom and it was this bedroom I’ll never forget. Odell had purchased the Chinese teak bedroom set of Robert Ripley the creator of “Believe it or Not”. Not too long after posting this article I was contacted b the director of the Chinese Snuff Bottle Society. The Society was started by O’Dell and the cabinets I had noticed in his home had been filled with snuff bottles. A 3″ tall baottle recently sold in England for 2 million Euros.

In preparation for this article I researched Dr. Odell and found a very interesting website, “The International  Chinese Snuff  Bottle Society”. There in splendor  was a book, “The Edward Choate O’ Dell Snuff Bottle Collection,by John Gilmore Ford with an essay by Emily Byrne Curtis, ICSBS, Baltimore, 1982.  200 high quality color photographs from the collection of Edward Choate O’Dell, founder of the society, with catalogue entries by our current president, John Ford.”

All my life Dr. Edward Choate O’Dell has been a hero to me. I remember very little about him, in fact I can’t visualize him today. But I remember how quiet he was during my audition for the boys choir, how carefully he went through the tunes as I sang. How kind he was at the end when he turned to me and said, “You have a good ear”. At a time when I could have been crushed, perhaps turned forever away from music, he did one of those rare things that provides one with an anchor for life and the self confidence to excel. He was a great teacher.

After a 20 year absence, I had to return to Baltimore to attend a relative’s funeral. My first Pastor at Saint Marks, the Rev. Dr. E. Cranston Riggin attended the viewing as did Dr. Odell. I had not seen them since I was 13 years old. I was humbled by their thoughtfulness.

Posted by robinengelman on December 13, 2011 in Articles, Commentaries & Critiques