RSS
← “Excuse me.” “No problem.” A cautionary tale about language
“John Cage Silences the Drums of War.” → 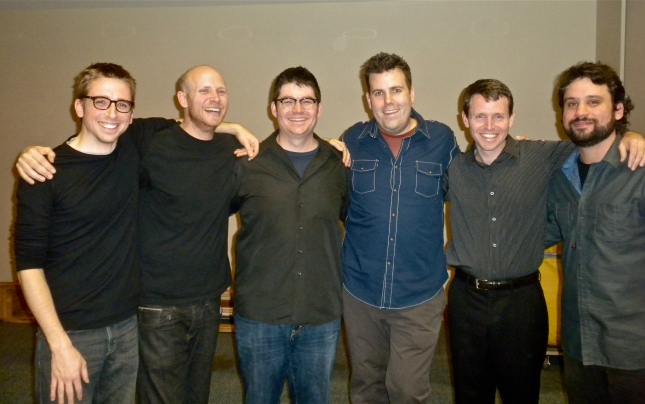 The Wednesday evening concert of the 2010 Percussive Arts Society International Convention in Indianapolis, Indiana featured the So Percussion group.  I had not heard So Percussion play a concert in about three years and though their contribution this evening was limited to one work, that work, Pleiades, is a four movement tour de force and arguably a seminal work in percussion repertoire if not in all of contemporary music.

About twenty years ago, Canadian composer and elegant raconteur Harry Somers 1925-99), addressed a Toronto concert audience with a fervent plea for new music. “I hope Canada  enters the 20th century before the 21st begins” he said.   But Toronto audiences continued pursuing their more traditional carrots, Handel at Christmas time, Bach at Easter and in between, Mozart, Beethoven and a Tchaikovsky ballet or two. Somers died on the cusp of the millennium, his plea unheeded.

Considering Somers’ entreaty, my first contact with the music of Iannis Xenakis (1922-2000) was, ironically, in Toronto.  James Levine, then 25 years of age, chose  to open his  conductorial debut with the Toronto Symphony Orchestra in 1968, with Xenakis’  work Metastasis, definitely not music of the carrot family.

Levine’s preparation was meticulous and although I could not have foreseen it, his work that week presaged his commitment to new music, particularly after taking over the Boston Symphony where he championed the New York school of composers – Elliott Carter, Milton Babbitt, Charles Wuorinen etc.

Pleiades was written during 1978–79 for the Strasbourg Percussion Ensemble.  It was premiered May 3,1979 with the Ballet du Rhin. My first encounter  with Pleiades was in the early 1980s in Walter Hall of the University of Toronto. Xenakis was the featured composer on flutist Bob Aitkin’s New Music Concerts.

I believe our performance in Toronto was the Canadian premiere. The work is 43 minutes in duration and besides drums, marimbas and glockenspiels, Pleiades requires six instruments which Xennakis claimed to have invented, but never built. He called these “imaginary” instruments Sixxen.

If memory serves, Xenakis’ description of Sixxen was vague. Each Sixxen was to consist of 19 slightly out of tune metal bars pitched within a tessitura similar to each, but  avoiding unisons. The father of a percussion student at the University of Toronto faculty of music worked in a foundry about 45 miles north of Toronto. He made these instruments free of charge and delivered them to Walter Hall.

They arrived covered with oil, grime and metal filings. By the time they were unloaded and ready to be played, our hands were filthy. We rehearsed and I remember very little about the piece except that it was brutally loud, very difficult to play and its pages black with notes. The late John Wyre would have said, “It doesn’t pass the light meter test”. Wags have suggested that Xenakis’ loud music was the result of his progressive deafness and that seemed confirmed by him asking repeatedly for us to play louder.

Xenakis arrived to coach the last couple rehearsals. As soon as he heard our version of his imaginary Sixxen, he objected, stating that the sound was not at all what he had in mind.1

I remember being struck by the fact that he was ungracious. He didn’t thank us or recognize in any manner our attempt to realize his sometimes fanciful instructions, but still his program note claimed the Sixxen were his invention and the heart of Pleiades.  Many years later I learned that Xenakis had objected to the original Sixxen built by the Strasbourg Percussion Ensemble and indeed, to every Sixxen built during his lifetime. And this brings me back to the So Percussion,Meehan/Perkins Duo performance.

With thirty year old memories of foundry oil, grime and metal filings and the deafening clang of Sixxen still in mind, I was more than curious about attending this performance. As I entered the convention concert hall, I felt the same vague sense of unease and anticipation as I had felt before attending my 50th high school graduation reunion.

I need not have worried. So Percussion, Meehan/Perkins Duo  were simply astounding. All the difficulties I remembered from the past vanished. The clarity of their performance made the contrapuntal and polyrhythmic complexities of  Pleiades vividly clear. Even more impressive was their orchestration. All the drums were audible, their tunings exquisitely prepared. But it was the Sixxen that most impressed me. Next to that sound, the traditional mallet percussion sound was almost a cliché.

“I built the Sixxen for So’s first performance of the full Pleiades back in 2004″, wrote Adam Sliwinski.  “Although Xenakis said not to tune unisons among the players, I made each bar quite close – but never the same – so that you can really hear unison textures”.

When I inquired about the computer, which I had not seen from the audience, Adam replied, “We use a click track to perform Pleiades. One of its most important compositional tactics is to oscillate between transparent unison and calculated chaos.  The polyrhythms of this chaos are really interesting, so we enjoy playing them exactly right.  Of course, it is always important to use good chamber music sense, especially when you have a pulse in your ear.”

So Percussion, Meehan/Perlins Duo’s fluidly precise performance belied the use of click tracks and Pleiades in their hands was the best performance of any single work I’ve heard at a Percussive Arts Society International Convention.2 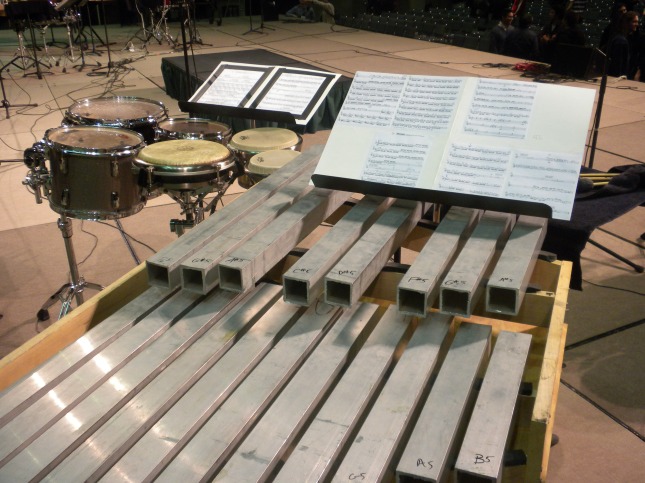 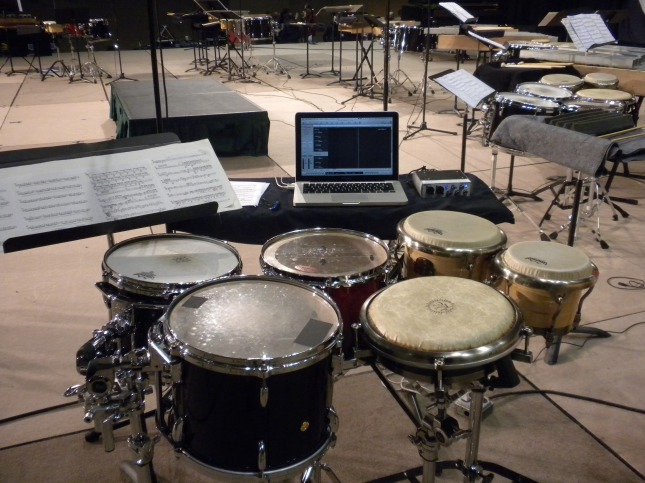 1. “SIXXEN is a specially constructed instrument named from Six (Strasbourg) and Xenakis.  But the SIXXEN is not yet fully satisfactory.  It would be desirable to construct a new one.  This is its description: each one of the six percussionists use 19 metal pieces (made of brass, steel, etc) of approximately the same timbre.  It is highly desirable that the timbre be a really interesting metallic one.  By interesting I mean astounding, strange, full, resounding, and without too much reverberation, so that the minute rhythmical patterns be clear for the audience.  These 19 metal pieces should be tuned to produce 19 pitches but which should absolutely not form an equally tempered scale.  The whole range of the 19 pitches is arbitrary and should depend on the available pieces.  However, this range should be nearly the same for all the six percussionists and placed within the same extremes of pitch.  This means that for a given pitch out of the 19, and for any of the six SIXXEN, the other 5 corresponding ones must not form unisons.  The deviation could be slight but should still be noticeable.”  – Iannis Xenakis

2. Todd Meehan and Doug Perkins were founding members of So Percussion and also perform as the Meehan/Perkins Duo.

Posted by robinengelman on December 2, 2010 in Articles, Contemporary Music

← “Excuse me.” “No problem.” A cautionary tale about language
“John Cage Silences the Drums of War.” →

One response to “So Percussion + Meehan/Perkins Duo”