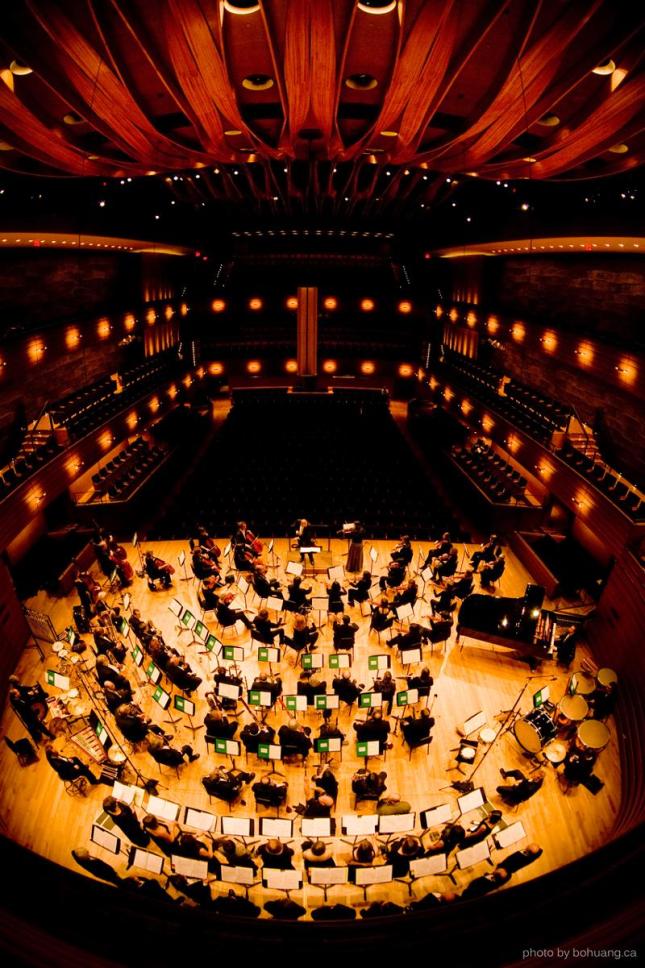 The building on Toronto’s Bloor Street West which houses The Royal Conservatory of Music, The Glenn Gould School of Music and the Koerner Concert Hall, is wedged between Philosopher’s Walk and a small, uncovered university stadium.

The Royal Conservatory was raised in Victorian splendor, but in recent years its creaky floors had become a constant reminder of its age and the fragility of its pedagogical standing . A fund raiser was begun to bring the building into the twenty first century.  A modern expansion in stainless steel and sheets of glass was built, the concert hall its linchpin and major attraction.

After a schedule of opening concerts, praise from musicians and audiences was ecstatic. A national newspaper called it “The Temple of Tone”. I suspect there were many  bruised egos in the artistic community  when the performers chosen for  the Hall’s opening season were announced. Some local ensembles, able to afford the higher rent and hoping no doubt to rejuvenate themselves and their audiences, moved their concert series, in whole or part, to Koerner.  Practically overnight, it became the place to play and the hot ticket.

Hyperbole abounds when a new hall is launched. No matter the flaws, it’s new. A lot of money, reputations and hopes rest on its success or perception thereof. If it doesn’t work, well .  .  .  Roy Thompson Hall, the home of the Toronto Symphony, was a good example of the Emperor’s New Clothes. The symphony board of directors was intimately involved with fund raising and a Simpson Co. executive was named point man. One of his most memorable statements was in defense of the acoustician chosen for the concert hall. “Recently he’s had two major failures and Toronto will be the beneficiary of his mistakes”.

A conspiracy settled over the project. Only good news was wanted. Conductors, hastily attached themselves and their organizations to this latest Edifice Complex erection. “Finally we can hear ourselves” said a symphony musician. But it didn’t take long for truth to begin creeping, however slowly, through the cracks in the concrete of corporate, artistic and  administrative hubris. James Galway, new to Roy Thompson and riding the crest of a fabulous career, stunned his audience by saying the hall’s acoustic was terrible and he would never play in the hall again. He didn’t.

After twenty years of silence, Galway’s comment emboldened Toronto’s senior music critic to suggest something should be done to improve the hall. I’m sure his suggestion,coming as it did from a local, had as much effect on the Symphony board and the hall’s subsequent six month renovation as did anything else.

Koerner Hall exists in large part because of  the beneficence of Michael Koerner a resident of Toronto who is an avid supporter of the arts. He and his wife  Sonja gave $8,000,000 towards the Royal Conservatory building fund including a collection of 18th century music instruments.

The Koerner concerts I’ve attended provided a wide spectrum of acoustical challenges: a symphony orchestra, a percussion ensemble, a choir, a violin recital and a piano recital.  The most successful  was the percussion concert. The house was sold out and I was seated mid way on the main floor and clearly heard the strokes of each player and their differences.

My seat for the orchestra concert was two thirds back and in a side box. The house was very close to full. An  accordion concerto was performed  with the composer as soloist. During the entire work,  I could see his feet keeping time, but, aside from a short solo introduction, I did not hear a note from his instrument. Friends in the side balcony experienced the same defect, but friends who sat on the main floor heard everything. The CBC producer told me he had problems recording the soloist because he was seated a couple of feet too far  upstage.

The choir stood on risers at the back of the stage and its sound was clear and fulsome. I spoke with the choir’s director and she told me the risers in that position created the best sound.

For the violin recital the house was full and my seat was five rows from the stage on the left side of the main floor. During the first half, the violin had an unsettling whine, a sharp, almost irritating sound. The tone problems were gone during the second half which was devoted to solo repertoire. The violinist had moved towards the audience about three steps. From my perspective, that’s all it took to correct the problem.

I also sat very close to the stage, again on the main floor, for the piano recital and at one point heard very high harmonics that echoed eerily  after certain chords in the low register. Otherwise, all was clear.

By relating these experiences, my intention is not to suggest Koerner Hall is burdened with its own style of Emperor’s Clothes. It’s far from that. It is a welcome addition to Toronto performing spaces. It seats about 1,100 people which is a perfect size for major chamber music players. But Koerner has acoustical issues that will need to be tweaked. The question is, how long will it take for artists, administrators, conductors and audiences to face up to its flaws and explore corrective modifications?  About ten miles north there is ample reason to act sooner then later.

The George Westin Recital Hall is one of Canada’s and the world’s precious gifts to music. Wigmore Hall in London comes first to mind when I contemplate comparable performance spaces. Yet Westin Is Toronto’s musical remittance man.  Its exile is plagued by location. Anything north of Highway 401, the great multi lane expressway which cuts a swath across the top  of the city, is felt  by concert goers to be a kind of Ultimate Thule.  If they have to go north of the 401, they’d rather go to dinner south of it. Too bad. Westin Recital Hall is a concert hallmark, once experienced, never forgotten.

I began this posting with the idea of writing a critique of Pierre Laurent Aimard’s piano recital. I met pianist Stephen Clarke in the lobby before the concert and his first words were, “This is the do not miss concert”. And it proved to be.

Posted by robinengelman on May 6, 2011 in Articles, Commentaries & Critiques

← We Stand on Guard for Thee
JAZZ as America’s Premier Art Form  By Ratzo B. Harris →