RSS
← Bang, Bang You’re Dead!
Surrender of Paris is The Downfall of Paris → 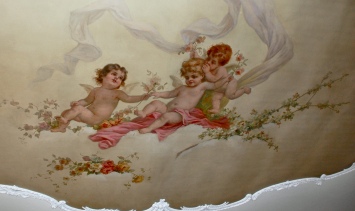 (If you could travel back in time, what year and date would you choose?)

The  Requiem or Grande Messe des Morts, Opus 5 -(h75), 1837 and Symphonie Fantastique, Opus 14- (H 48), 1830 [1.] both written by Hector Berlioz, are  great works in the Romantic repertoire.  My appreciation for his wondrous orchestrations and sonic surprises, as fresh sounding today as when I first heard them, continues to grow.

Preceding both was a work which  until recently I’d not given enough attention. Written when Berlioz was 20 years old and had been studying music formally for only one year, the Messe Solennelle or Solemn Mass, (H 20A), 1824 was premiered in 1825 at the Church of Saint- Roch, Paris. [2]

For Berlioz fans, the Messe Solennelle throws a revealing light upon the composer’s growth. It illuminates the germination of ideas that would  shortly  appear in full bloom in his greatest works.


Gratias. from Messe Solennelle. Theme for Scenes in the Country, Symphonie Fntastique.

Sometime after the second performance of the work, Berlioz burned the orchestral and vocal parts to the Messe Solennelle.  He may have thought the work unrepresentative of his more mature  style.  However, Berlioz gave the complete score to a violinist friend from Antwerp who before his death gave it  to his  brother, a church musician. Assumed to have been burned or lost, the score written in Berlioz’ hand  was discovered in an Antwerp church organ bench in 1992.

Footnotes:
[1.] Though written 7 years earlier than the Requiem, Symphonie Fantastique has a larger or later Opus number. This is  the result of its  publication date.  Symphonie Fantastique was published in 1845 whilst the Requiem was published in 1838.  In 1987 the D. Kern Holoman  chronological catalogue of all  compositions by Berlioz  was published with the designation H  before  Opus numbers.
[2]   The July 10, 1825  premier was conducted by  Henri Valentino and Berlioz played the Tam-tam. Messe Solennelle was  performed again in 1827, the year of Beethoven’s death, Berlioz  conducting.

July 10, 1825 is my answer to the time travel question. Just imagine being close enough to the orchestra to watch the face of Berlioz as he waited for and then played that great note. Is this Tam-tam  still in existence? Is the beater?)

+This article is based largely on notes written by Hugh Macdonald for the Philips recording CD booklet.

Posted by robinengelman on January 14, 2012 in Articles, Composers, Unassigned

← Bang, Bang You’re Dead!
Surrender of Paris is The Downfall of Paris →