Admiral Edward Boscawen,(1711-61) joined the  British Navy at the age of 12 years and remained in its service for the rest of his life. Though he died young, he achieved one of the great careers in British naval history. One example of his success came as commander of the British Blue fleet during the investment of Fortress Louisburg, July,1758, thus providing a staging area for Gen. James Wolfe’s campaign against  Québec City. Boscawen was nicknamed “Wry-necked Dick” due to a habit of cocking his head to one side, as captured by Reynolds in his portrait above.

During the French West Indies campaign, Boscawen took part in capturing the island of Guadaloupe. Lasting from January to May of 1759, the battle resulted in the British wresting Guadaloupe from the French.  In the first Treaty of Paris (1763) France regained the West Indies by relinquishing its claims to Canada.

In his book, As If An Enemy’s Country, Richard Archer wrote: After the conquest of the island of Guadaloupe during the Seven Year War, Admiral Edward Boscawen procured 8 or 10 boys whom he gave to his brother, at the time the commanding officer of the 29th regiment. Boscawen thought the boys would be attractive and exotic ornaments and made them drummers, starting a tradition that continued until 1843. [1.]

Were these Afro-Caribbean boys the genesis of exotically clad Negro or Blackamoor drummers in Britain’s military bands?  After a conversation about Boscawen a scholar friend, David Waterhouse did some research and sent me the following report:

Blackamoor first appears in Lord Berners’s translation of Froissart (1525), referring to two blacke Moores richely apparelled: so already there was the tendency to dress them up. 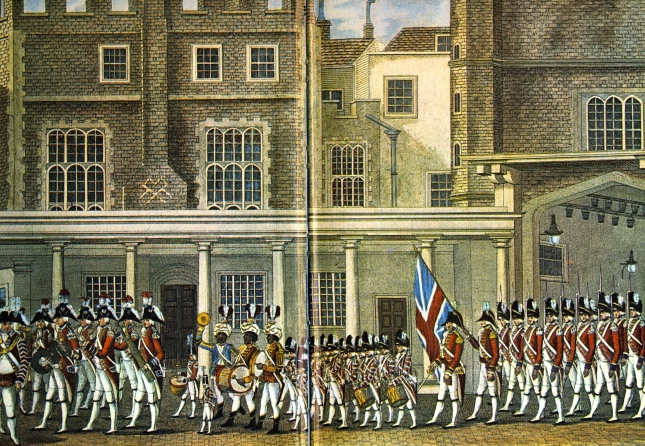 Meanwhile, I think I have tracked down the immediate source of your story about Admiral Boscawen. Hugh Barty-King, in his The Drum (London: The Royal Tournament, 1988), p. 57, says:

“But the man who brought a spate of black drummer appointments in the British army was a naval man, Admiral Boscawen. Being in the Caribbean at the surrender of Guadeloupe in 1759, he cornered ten West Indian boys and brought them home in his ship. Once in England he presented them to his soldier brother who commanded Thomas Farrington’s Regiment, the 29th Foot (late The 1st Battalion Worcestershire Regiment). Permission was obtained from King George III to retain them as drummers, the last of the line dying in July 1843. From then on it became The Thing to have black drummers in British military bands and dress them more and more fancifully…

There is more, both before and after this passage: Barty-King refers to Moorish drummers in the 4th Dragoons as early as 1715.

David sent me the lenghty entry on Adm. Edward Bascawen from the Dictionary of National Biography, published by Oxford University Press in 60 volumes in 2004. There is no mention of him being associated with negro, black or Blackamoor drummers.

“Stories containing incorrect information persist. They are repeated over and over. I don’t know Hugh Barty-King. What was his primary source? You must go back to the primary source.” David Waterhouse

And so gentle reader, until  a primary source is found, we must take the Boscawen story as written by Archer and his probable source Hugh Barty-King, with a grain of salt.

True or not, I believe all the accounts above about Blackamoor and black drummers had to do with Snare Drummers only. Boscawen’s battle for Guadaloupe predated the famous print of a British Band in St. James courtyard by perhaps thirty years and by nine years the disembarkment of the 29th Regiment at Boston. Therfore my next question is, when and by whose order did British bandsmen begin playing Bass drums, Cymbals, Triangles,Tambourines,Tenor drums and the Jingling Johnny? This instrumental component was referred to as the Janissary by British band musicians. [2.] Surely, they were meant not for combat, but for Pomp and Circumstance only.  A Janissary was not with the 29th Regiment in Boston,[3.] as it certainly would have created a sensation and been reported.

The Court-marshal and execution of Adm. John Byng (1704-57) was a very controversial and dark affair in British military history. Adm. Boscawen, a strict traditionalist, signed both orders in 1757. Notables including The First Lord of Chatham, William Pitt (1708-80), came to Byng’s defense, but George III refused to repeal the judgement.  Byng knelt on a pillow and instructed the guardsmen to fire when he dropped his handkerchief. 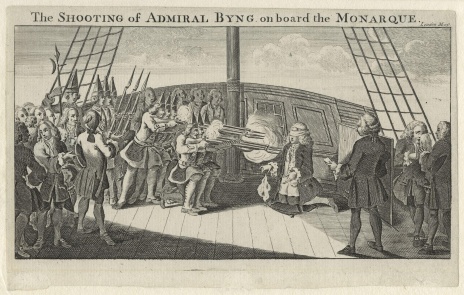 The shooting of Admiral Byng.

[2.] The Janissary, meaning New Soldier, was formed in Turkey by an Ottoman sultan sometime during the late 12th century and disbanded by Sultan Mahmud II in 1826. Young men and boys were kidnapped or otherwise recruited from countries outsideTurkey and trained for duty as bodyguards for the sultan. The Janissary and their music were encountered by the west during European crusades which began in 1096. After their defeat at the second battle of Vienna in 1683, Turkish music instruments were collected from the field of battle by European soldiers. As a sign of respect, Suleiman I sent the Polish hero, Jan Sobieski now King John III, whose cavalry threw back the last Ottoman attack, a troop of Janissaries and its musicians. Not much time passed before composers such as Gluck, Haydn and Mozart made use of the new and exotic Janissary sounds.

[3,.] This was the British occupation referred to in the title of Archer’s book. The Bostonians considered themselves British citizens loyal to the King and were not amenable to being occupied by soldiers. As Archer said: The presence of a standing army was alarming enough to the citizens of Boston, but having armed Irishmen and  Afro-Caribbeans in their midst was a nightmare.

b.) Archer, Richard: As If An Enemy’s Country, The British Occupation of Boston and the Origins of Revolution, Oxford University Press, 2010.

6 responses to “Admiral Edward Boscawen and a Drumming Tradition.”