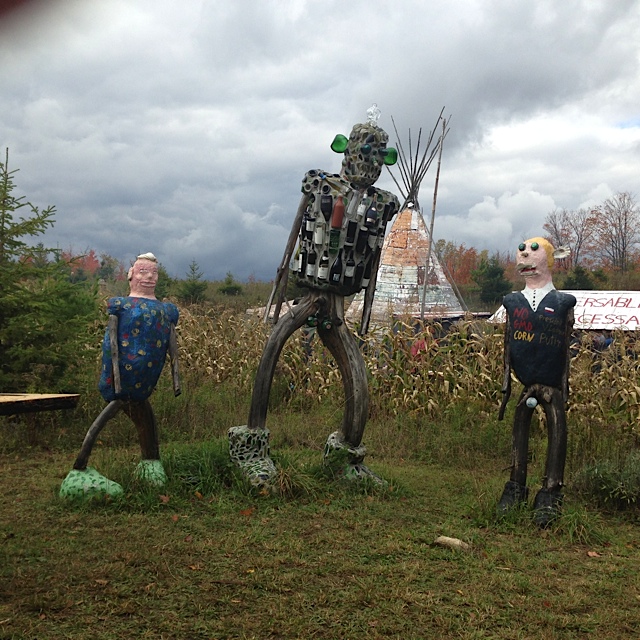 Taking Ontario Provincial hiway 124 North from Toronto will eventually bring you to the roadside village of Singhampton.  If food interests you, two restaurants await, the long established  local family favourite, Mylar and Loretta’s Restaurant and from Friday through Sunday, the slightly incongruously named, Haisai Restaurant and Bakery, the latter owned by world renowned chef Michael Stadtlander. If you’d made reservations 2 or 3 months earlier,  you can continue due north and hang a left on the 10th Concession for dinner in Stadtlander’s farm house living room at Eigensinn Farm.  For Grey Highlands dining, that’s about as good a spread in economics and culinary delights as one can expect anywhere in the world, even on King Street west in Toronto. 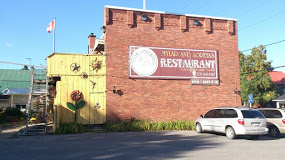 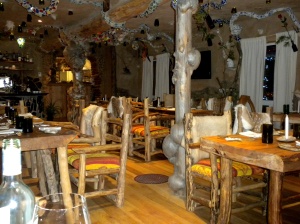 This past Sunday, 5 Ocrober, 2014, my wife and I attended Harvest Feast, a celebratory gathering of chefs and friends in a field on Eigensinn Farm. Michael is involved in environmental issues and led a group who stopped, at least  temporarily, the mega quarry which endangered about six area rivers. He espouses the use of locally grown organic products free of hormones and these celebrations, for instance a Wild Leek Festival in early summer honoring the tubor of Shakespearean fame, are attended by large numbers of people who share similar beliefs and enjoy Michael and his wife Nobuyo’s hospitalty.

Then too, the food is a  powerful draw.   After his friend chef Jamie Kennedy convinced Michael to leave Lubeck, Germany for Ontario, Michael became a leader in the food industry in Canada. He has trained or influenced hundreds of chefs, critics and so-called foodies.  Occasionally I’ve glimpsed his leadership style and he can be a tough pan handler. But it’s tough work ruling a kitchen and restaurant. After a student passes muster, you can be sure they’ll fit meaningfully into the service.

I’ve attended many of the Eigensinn Farm events as a musician. Usually I find a place for myself off the beaten track and discretely improvise dinner music. During one festival I played a drum beat behind a lovely waitress who marched amongst the diners holding cards aloft printed with the next courses. This year I was simply Michael’s guest. I think Michael has achieved the mantle of grand Pooh Bah. He invited his usual cohort of chef friends, but did not himself cook. For the first time I saw him strolling contentedly around the field snapping pictures and looking very relaxed.  Nobuyo  makes sure the guests and chefs are content.

These festivals usually begin at the oyster shack.  Adam, one of the owners of Oyster Boy on Queen Street  West, was shucking oysters barehanded, fast enough to keep up with newcomers.  I love raw oysters and I always have difficulty getting past this opener . Oyster Boy oysters are stapels of my daughtr and Son-in-Law’s Christmas party. While I was waiting for another mouthful, I began speaking with Sheldon a Torontonian who owns a number of pet stores and clinics. He’s one of the regular Stadtlander friends. On one occasion he flew out to Vancouver Island to hang out with Michael during the filming of a DVD about homegrown Canadian products. Today, Sheldon hired a bus to bring friends from Toronto north to Eigenssinn. 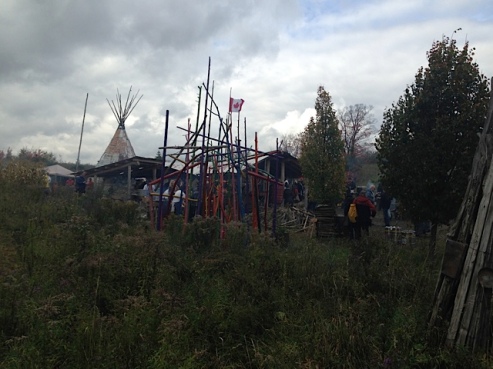 Next to the oysters was a fellow who had made a hot curry soup. It was delicious and on this day, cloudy, breezy and getting colder by the minute, much appreciated. We walked through an arch made of flexible vines that reminded me of an arch I’d seen at a Jewish wedding. Immediately on the other side of that arch was Paul Harber, former student of Michael and Michael’s mentor in Switzerland. He was dishing out baked beans with speck, another delight  in this weather. When Paul returned from apprenticing in Europe, he opened a restaurant at Ravine Vineyards  near Niagara-On-The-Lake, a winery owned by his parents.

Right next to Paul’s table were statues crafted by Michael of Nobuyo’s mother, Michael and Vladimir Putin. Putin was being honored because he had banned huge shipments of GMO food from Europe bound for Russia. Slightly further down the hill awaited coarse sausages, and mash potatoes andsauerkraut nade with white wine. would it be possible to get through this day? To  each the sauerkraut, one of my wife’s favorite things in the world, we rested our plates on a wooden shelf and opened our bottle of Ripasso wine. We were really getting into it when Michael stopped by and asked if we knew Alexander Molitz., a young chef preparing vegetarian dishes just a few feet from us. I certainly knew the name Molitz  and sure enough Alexander was the sum of Alan, a string bass player I had performed with many times over the years. I had never met his son and it was a pleasant surprise and a real pleasure introducing ourselves to each other. 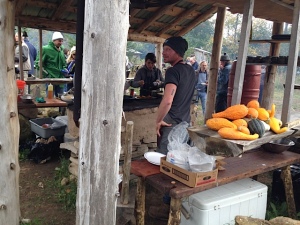 Michael had hired a terrific polka pop music band, accordion we electric piano, lead and rhythm guitars, and a drummer who had quite a bit more than off beats in his repertoire. They were set up in a little tent and made the crowd happy. A little further on wasPaul Böehner’s station , Paul’s from Hamburg, Germany, but he had not yet arrived. When we met Michael a little later, he laughed and said, “Paul’s an hour late”. Böehner’s, 93 Ossington Ave. 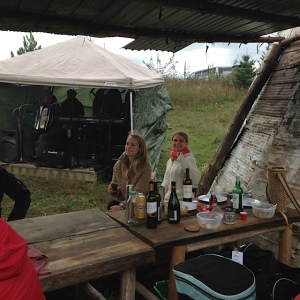 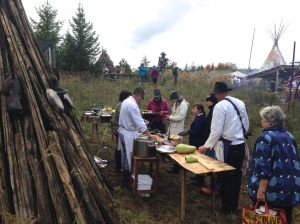 Chef Hiro of Hiro Sushi, 171 King Street East, Toronto, kept pointing to various concoctions saying, “Eat this, it’s good”. One of them was laced with a wasabi kick that cleaned my sinuses. For a moment or two I was stunned. Oh God, it was good.  Waiting in line is my wife Eleanor and Michael Stadtlander.Next to Hiro was executive chef Daisuke Izutsu of Don Don Izakaya, 130 Dundas Street west who was serving delicate and deliscious white fish. A next to Don Don? A  a steam engine.  Every now and again, the owner would pull a cord on its whistle bringing forth a loud toot and a cloud of steam, an added delight  to the crowd’s afternoon. The engine was built in 1872 and according to his extensive research, it was the lastt engine in North America powered 100% by steam. It was a beautiful thing. 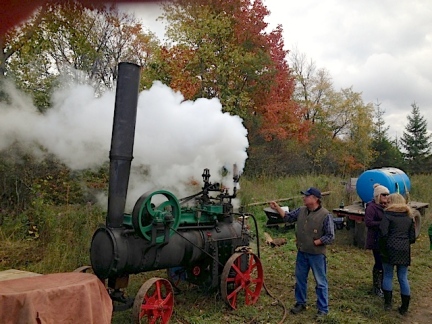 My feet were getting cold. I knew from living many years on a farm north of Toronto, that here atop the escarpment, temperatures and darkness could descend with alarming speed. Cold outdoor air has always revivified me, but now as a chill krept in, I needed a warm place. Michael had offered my wife saur kraut, but we couldn’t wait. Our warm place, Mad Maple Country Inn was beckoning.

Posted by robinengelman on October 10, 2014 in Articles, Commentaries & Critiques