What the F–K is This? 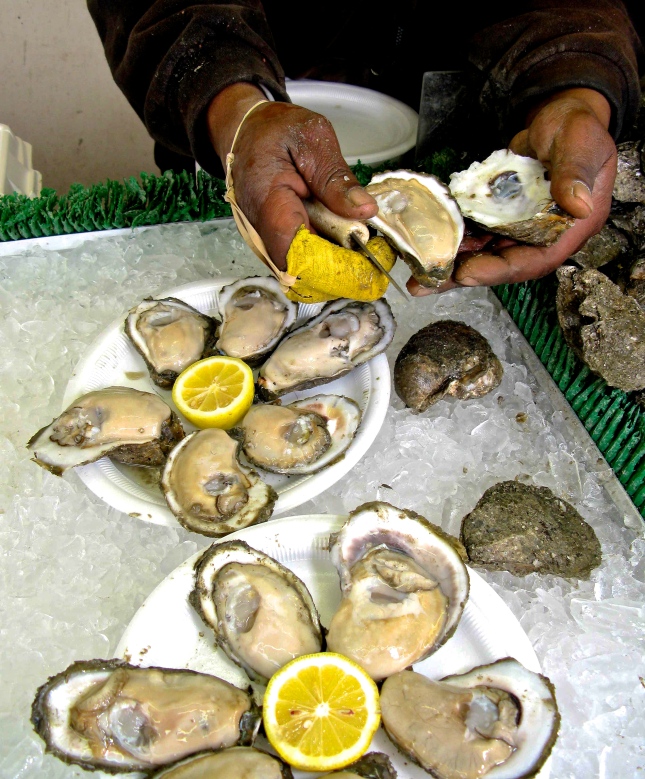 Hooper’s Island is located halfway down the Chesapeake Bay just off the eastern shore of Maryland.  In1668, a major portion of the island, actually three virtually contiguous islands, was surveyed and given to Henry Hooper, the progenitor of my wife’s family on her mother’s side. When her mother and father retired, they built a home on the shore about 10 miles east of the Chesapeake Bay Bridge, the property touching the Wye River, a Bay tributary.  During frequent visits to their home, I enjoyed soft and hard shelled crabs, fish and oysters all fresh from the bay.

When my wife and I were dating, she worked one summer in one of her uncle’s restaurants, a Hooper’s of course.*  We visited her grandfather’s oyster stall in Baltimore’s North Market and spent many moments together enjoying freshly shucked oysters. (See photo above.)  Later, world travels introduced me to perhaps 20 or more varieties of oysters. I mention all of this to establish my bona fides as an oyster aficionado.

The Chesapeake Bay. A natural confluence of salt and fresh water producing the world’s most succulent oysters. This once lush and abundant land is movingly described in the opening chapters of James A. Michener’s novel Chesapeake. Any food loving conservationist would be well rewarded by reading Michener’s poignant description of the bay and its abundant aquatic wild life just before Henry Hooper arrived –  hard and soft shelled crabs, ducks, geese, turtles, fish and of course, oysters. A gastronomic heritage now mostly relegated to memory.

Oysters from the east and west coasts of Canada have become popular appetizers in some Toronto restaurants. In a restaurant one Canadian grown oyster on the half shell can range in price from $3.00 to $5.00. With another couple, my wife and I have been gradually taste testing restaurant oysters hoping to find acceptable sizes and qualities. The results have been so so. At this time, Oyster Boy on west Queen in Toronto is the winner. He supplies a shucker and baskets of oysters for my daughter’s yearly office party.

And there’s the rub. If I order a steak rare and it arrives well done, I can send it back. It’s the kitchen’s fault and my only penalty is waiting for another steak. But what about oysters? If I complain about size, I may be on a slippery slope with an overbearing maître d’ who will lecture me about the vagaries of oysters, and their sizes which cannot be predicted. In other words, you sniveling uncouth amateur, it’s nature’s way, not the fault of this kitchen.

I have a reputation in my family for being too critical, argumentative, even hostile when I feel a restaurant has abused or ignored common standards of quality, preparation or service. I had a good teacher – a former colleague in Nexus.  Bob Becker said to a waitress in the boon docks, “Take this pat of butter back, it’s rancid”. If he ordered the perfect wine for his meal and was later told it was out  of stock, I’d cringe and want to be somewhere else, fast. On the other hand, Bob could be a blissanthropic gourmet. We were about to enter the Great Smokey Mountain National Park when he spied a log framed roadside restaurant. We looked at the menu and he said with real anticipation, “Ah, a ham steak. This is gonna be good”. And so good it was, I heard nary a word from him till he let out another “Ahh”.

So, this is what I’m gonna say to my maître d’. “How was it possible your shucker didn’t toss these aside? Who put them on a tray and who allowed them to leave the kitchen?  Pope Francis wouldn’t call any of these drops of snot a foetus, much less an oyster. I want these deducted from my tab. I’m not paying 3 to 5 bucks a piece for these insults. So, you sniveling bloviated bombastic bag of bullshit, What the F–k Is This”?

‘Tis up to us folks. If we don’t complain, the capitalist Bottom Line will not feed us. Join hands for a moment. Take another look at the picture above, bow your heads and dream along with me.

* In June of 1960, Dunbar High School students staged a sit in at this restaurant, located at 33rd and Charles Streets in Baltimore, thus provoking one of the very first Civil Rights cases to go to court. The charges were dismissed.

Posted by robinengelman on November 18, 2015 in Articles, Commentaries & Critiques, History