I’ve always loved free stuff and now that I’m living on pensions, I really love free stuff. My eyes have gone far enough south for grits, but they’ve provided me a free pass on public transit vehicles. This pass, my car’s handicap sticker and plans for two Liquor Control Board outlets within easy walking distance of my condo, are perks that make life more comfortable and stretch my dollars.

When Christa Mercey called with an offer of two free Cirque du Soleil tickets, my faith in the benefits of old age and former students continued to percolate. Of course I said yes and a few days later my wife and I slipped into a free parking space reserved for Cirque employees. This saved us a $20 parking fee. We dropped my handicap sticker on the dash board just in case. Christa, in make up, met us at the security gate  and ushered us into Cirque du Soleil’s main tent.

Cirque du Soleil is a Canadian company, founded in 1984 in Montreal. It is a version of contemporary Circus whose shows are built around stories or themes and relying upon costumes, lighting and acting more than live animal acts. My wife and I saw the first Cirque du Soleil show in Toronto and our eyes were opened to what else a circus could be. Cirque du Soleil now exceeds US$810 million, and its nouveau cirque shows have been seen by nearly 90 million spectators in over 200 cities on five continents.(Wikipedia)

Once Inside, a box of pop corn and a soft pretzel set us back 11 bucks, but so what. We were well ahead in the exchange game. The tent holds 2,700 people. Tickets for the Cirque begin at 60 bucks for a child 12 years or younger and surges to $160. Then they rise faster than an atheist at a Pentecostal baptism, to the VIP Experience which costs $265. For them shekels, you get a plastic bag containing an autographed photo and other things suitable for a plastic bag.

But we knew Christa Mercey! She got us isle seats in the VIP section 6 rows from the stage, dead centre. See photo below.

Christa is Cirque’s percussionist and Kit Chatham, a former drum soloist with the drum and bugle corps show Blast , is Cirque’s set drummer. Kit has been with Cirque for ten years and Kurios is his sixth show. Christa’ joined  Cirque for the first time last November in Montreal for the creation of Kurios. All the musicians open the show by parading through the audience in costume. There is a bass player/ band leader, a guitarist, accordionist/keyboardist, a violinist, a singer, and a cellist/keyboardist. And do they ever earn their keep.

Because of my eyes, I didn’t see much of the show.  However I did see a glamour of legs, upright and writhing seductively from a mound of bodies like tentacles on a sea anemone. The legs belonged to young women who uncoiled themselves and did things with their bodies, unimagined or only dreamt of by mere mortals. During intermission a net was raised across the stage about ten feet in the air. When the lights came on, a group of young men began trampolining to absurd heights, eventually hurling one team member to a platform at the top of the tent.

The show is called Kurios: Cabinet of Curiosities and the stage was covered with curios. The main acts were contortionists, gymnasts, aerialists, balancing acts and clowns, historic staples of any circus,were exceptionally good. . Though I could not see what they were doing, the clowns made the audience laugh. The music was written for the show and contains Indian, mid-eastern and gypsy influences and never mimics the up tempo, off beat style of traditional circus music.

The show is fast paced and the musicians were terrific. Just about everyone of them had their moment on stage. Christa and Kit brought the house down with complex and flashy cross-sticking solos and duets on indefinable curios. During the rest of the show, Christa played her  xylophone, celeste, glockenspiel, timpani, bass drum and gong on the MalletKAT. Acoustic percussion included bongos, tom-toms, snare drum and accessories.

Just off stage, Christa’s percussion set up with TV monitor.

As usual in a circus, the drummer provided ‘hits’ to accent climactic moments during on stage acts. The  accordionist and violinist each provided a virtuoso, tour de force solo equalling the acrobats who closed the show. When everyone came on stage for bows, they received a standing ovation.

Christa took us back stage. Some of the acrobats had already begun practicing in a large, tent covered space. As I looked around, I was impressed with the amount of gear and people needed to keep this show on the road. Christa told us how on closing night, the crew would have the rehearsal space and tent dismantled and packed away by the time the cast members had taken their last bow. From Christa we learned the musicians played with a click track. Personally, I dislike click tracks, but I suppose given the pace and complexity of Kurios and the fact there is no conductor, some controlling mechanism would be necessary. The click track did explain the occasional lack of coordination between the music, most obviously the drummer, and cliamatic moments in high flying acts. How could an aerialist always catch his partner precisely in time with a metronome?

Cirque du Soleil is an exciting experience. Christa’s role demands percussion virtuosity and charasmatic stage presence, both well within her wheel house. The weeks are long, the show is an endurance test, but Christa’s enjoying herself and her career continues to grow.

Cirque du Soleil packs its tent on 26 October and leaves for San Francisco. 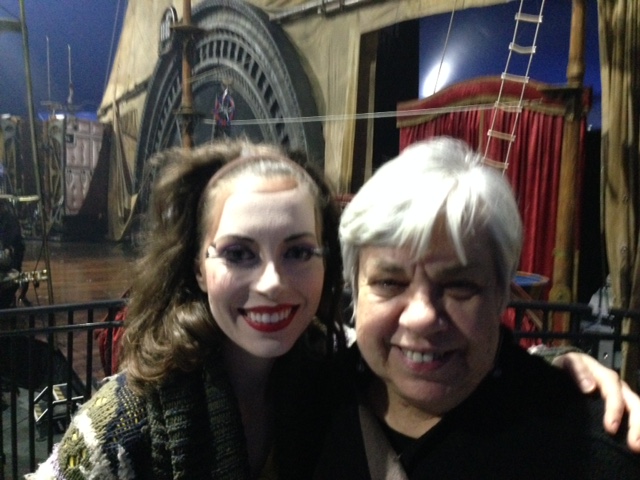 Christa Mercey, percussionist Cirque du Soleil, out of costum, but still in make up with Eleanor after the show.

Christa Mercey graduated from the University of Toronto Faculty of Music with a Bachelor of Music degree in percussion performance and played with Toronto based TorQ Percussion Quartet and Scrap Artas Music before accepting an offer from Cirque du Soleil to play percussion and the part of Bela Donna on their Kurios: Cabinet of Curiosities Tour. The tour began in Montreal and after the Toronto run , it moves to San Francisco, Seattle and Calgary.