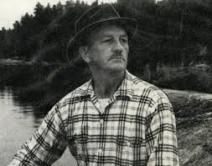 I grew up in Baltimore, Maryland, one of the hot, humid arm pits of North America’s east coast. As I write, I’m in Toronto, in the midst of a polar vortex and it’s cold and dry. When the dark months of Canadian winters arrive, I always think of Calvin Rustrum (1895 –1982), an American writer who championed our northern wilderness and its preservation.[1.]

Rustrum, who learned how to write by reading books, wrote with passion and clarity about the rigors and rewards of  wilderness living. The New Way of the Wilderness (1958), The Wilderness Cabin (1961) and Paradise Below Zero (1968) inspired John Wyre and me, both relative newcomers to Canada, to plan a winter camping trip in the far north.

I sought advice from a forest ranger who had finished his tour of duty in the Canadian wilderness and was now ensconced behind a desk. I told him John and I envisioned camping for a week or two near the southern tip of Hudson’s Bay.

The Ranger looked at me in utter disbelief. No public service training had prepared him for a shnook like me. His eyes told me just how clueless I was. He began reciting the dangers of winter camping 550 miles north of Toronto and quickly disabused me of our plan and suggested we move our venue further south to Killarney Park just 250 miles north of Toronto. This relocation would enhance our camping adventure by cutting night time temperatures in half to a tolerable Fahrenheit 40° below zero.[2.]

Following Rustrum’s advice we purchased cold weather clothing: down filled parkas, pants, booties, mummy sleeping bags and scratchy wool longjohns. We had deer skin shooter’s mitts and canvas knee high boots with felt inserts, perfect for snow shoes and warmth. Our heavy utilitarian canvas tent was a rental whose entrance flaps were closed with buttons. A catalytic heater which threw off enough BTUs to heat a small room, was also rented. It would be lit with matches whose heads had been dipped in wax and stored in waterproof containers. We had sun goggles, toilet paper and a week of frozen meals in tin foil containers courtesy of my wife – our drinking water would be made by melting snow.

Our accoutrements in place, we drove north in mid February,1972. Our destination was the southern end of Lake George in Killarney Provincial Park. We arrived and pulled in next to a small wooden Park Service garage and John parked his Land Rover facing the county road. [3.] We put on our Himalayan rated parkas and filled the toboggan with all our gear. Immediately we encountered our first obstacle, a pile of snow, the residue of a plow that had cleaned the garage parking area.

The toboggan must have weighed a couple hundred pounds and we were trying to manhandle it over a bank of snow about 3 feet high, while wearing snow shoes. This was not the beginning I had envisioned. I fervently hoped no Park Rangers would appear to witness our struggles. Finally John and I made off towards the lake. Hauling our toboggan through dense forest was strenuous and we gave up our plan to camp lakeside. We stopped and agreed to pitch our tent where we stood.

Lake George was only about 100 yards away and we were anxious to get onto it.  At this time of year we knew the lake would be safely frozen, besides which, we could see fresh ski plane tracks. We stepped out, leaving the forest for its glaring, sun lit open surface. Snowshoeing is ungainly for beginners. The muscles and tendons of neophytes are susceptible to mal de raquette, an inflamation that can be painful, even debilitating. John and I both lived in the country and had experience on snowshoes. In deep snow and large spaces, snowshoeing imparts an unique sense of freedom.

Lake George is neither the largest or smallest of Killarney’s lakes. Directly to the east is a small lake named after the Canadian wilderness painter and member of the iconic Group of Seven, A.Y. Jackson. Killarney topography includes large granite outcroppings, small mountains, deep forests and mile after mile of great canoeing on its numerous lakes. For city folk, places like Killarney can be awe inspiring, imparting a sense of smallness upon its human visitors that can be disconcerting, even discomfiting. Wilderness, even when managed by goverment, imposes a gravitas of its own.

One of Rustrum’s rules was to dress in layers and carefully monitor body temperature. The problem for winter campers is not in keeping warm, but getting too warm. Perspiration will freeze and kill. Thus, as we warmed up, we opened our parkas, eventually removing them all together. Still warm, we stripped down to our boots. Naked, we faced the warmth of a northern sun. The sound of shuffling snowshoes had ceased. Our breathing had slowed. We didn’t talk. We stood motionless in a kind of rapture, transfixed by Killarney’s vast silence. Too soon the sun began to set and the cold came, fast and penetrating.

Being too warm is especially critical at bedtime. To prevent this, we’d sleep nude except for a cap and down filled booties. All our clothes were tucked inside the sleeping bag. The catalytic heater made preparing for bed and dressing in the morning, bearable.

The first night in my sleeping bag I awoke, urgently needing to pee.  In dread,I rehearsed all the moves I’d have to make to get outside. Wearing only my booties and cap, I unzipped the bag and crawled in blackness to the tent door and began unbuttoning the flaps. I realized I hadn’t enough time to enlarge the opening further. Careful not to pull our tent down, I scrambled outside, already colder than I’d ever been. So, this is how 40° below zero feels. I made it to the base of a tree and started to relieve myself. I was already shivering too much to control my aim and come morning I thought, John would find me frozen, attached to the tree by spindly bridges of urine.

With frantic, mincing toe taps, I hastened to the tent, but once inside I couldn’t button the flaps. My fingers were numb and useless. In my sleeping bag, it took five minutes for me to stop shaking. I’ve attempted to calculate just how long I had been exposd to the night air and my best guess is about two minutes. To this day I believe I’d had less then a minute left before succumbing to the cold.

That same night there was a rifle shot just outside our tent. Rustrum had warned us about this, but we were taken off guard none the less. At temperatures such as these, freezing sap expands and finally explodes, sounding much like a 22 rifle going off.

Birds may chirp and loons cry, but the unspeakably mournful song of wolves is beyond a human’s power to express. From an incalculable distance, their atavistic voices carried In the blackness of night over our frozen lake, recalling mysteries which silenced our conversations and gently took us back to the beginning of everything. Their sound and the crack of exploding sap were our nightly bedtime accompaniments.

As the end of our trip drew near, we decided to  drive into Killarney for lunch.  We put the catylitic heater under the Land Rover’s gear box while a ranger skinned a wolf in the garage. We timed our arrival perfectly. In the kitchen, a very large woman was bringing forth her latest batch of freshly baked butter tarts. I’ve eaten all over the world, but let me tell you, this was butter tart heaven. One might suggest that my week in a tent influenced my taste buds. They’d be wrong.

About two months later, I revisited Lake George  with my wife, our young son and daughter and our Great Pyrenees dog Chibi.[4.] The days were warmer and longer. The snow was greatly diminished, but the lake was still frozen solid. We spent a night in the Killarney Inn. The photos below are from that visit.

My family on Lake George with our destination ahead.

Almost at the top with Lake George below. Our Great Pyrenees dog Chibi was having the day of his life. Our daughter after all, would make it.

[1.] Rutstrum died on February 5, 1982 in Osceola, Wisconsin. Four years before, in Chips from a Wilderness log Rutstrum wrote: “If you want to do something for me after I’m gone, live so as to not defile the precious earth”.

[2.] During the week I was gone, my wife recorded night time temperatures of 25° below zero F. on our farm 30 miles north of Toronto.

[3] Today, a modern park service visitor centre stands on the former site of this garage and pathways meander through what is now Lake George Campground. The incredible beauty of Killarney Park and specifically Lake George can be seen in a large park service photo gallery on  http://www.ontarioparks.com

[4.] Chibi was named by my daughter after Chibiabos of Longfellow’s poem The Song of Hiawatha which she had memorized.

The musician; the harmony of nature personified. He teaches the birds to sing and the brooks to warble as they flow. “All the many sounds of nature borrow sweetness from his singing.”

Very dear to Hiawatha
Was the gentle Chibiabos.
For his gentleness he loved him,
And the magic of his singing.
Longfellow: Hiawatha, vi.