JOHN CAGE GOES AS SLOW AS POSSIBLE in HALBERSTADT, GERMANY. 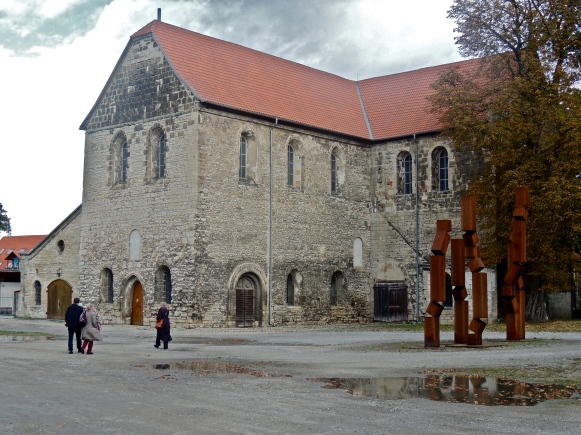 The drive to Quedlinburg had been long and tiring, much of it on the autobahn at night and in rain. As our hotel loomed beyond the car’s windshield wipers, we decided to reduce our travels by one destination. However, after visiting this medieval city in Germany, a World Cultural Heritage site, we changed our minds and drove back towards the city of Halberstadt.  Besides a collection of 18,000 stuffed birds and being known as the town where canned sausage was invented in 1896, Halberstadt had also spent years behind the Iron Curtain, thus missing much of the achievements and benefits of its West German compatriots.

Neither stuffed birds or canned sausage had brought us to Halberstadt. Michael Praetorius (1571-1621) had proclaimed Halberstadt the city where in 1361 an organ with the first modern 12 note keyboard in Europe was built and played. Harry Partch (1901-74) declared this a “Fateful day” as that keyboard is considered the beginning of modern music. Halberstadt’s St. Burchardi church is also the home of the John Cage project (1912-92 ) ORGAN2 As Slow As Possible (ASLSP).

ASLSP was written in 1985 as the required piano work for a Maryland State contemporary music competition. In 1987 the German composer and organist Gerd Zacher (b. 1929-), asked Cage to make a version for organ which Cage named ORGAN2/ASLSP. During a discussion of Cage’s music in 1993, a German musicologist made an offhand comment about an organ being capable of sustaining tones indefinitely. From that comment came the idea for an ORGAN2/ASLSP project.  A committee, a board of directors and a fund were established and the  Halberstadt’s city fathers donated St. Burchardi’s Church as a home for the project.

As we approached the entrance to St. Burchardi, I was free of preconceptions. We walked through the front door into a ruin. After political secularization, St. Burchardi’s was used as a pig sty. Today, rubble removed, and a new roof and floor of gravel, St. Burchardi casts a spell. It evokes an archaic temple neither removed from, nor a part of this world. Through pane-less windows, light revealed scarred timber beans, dusty walls and a general impression of the building’s original shape, created 1,000 years ago. We were  spellbound by the sound of two soft notes hanging in space. It was magic.

The ORGAN2ASLSP time span of 639 years was determined by subtracting the invention date of the 12 note keyboard from the millennium year 2000. Various difficulties,  however, delayed the project opening by one year.

Just beyond the entrance of St. Burchardi, photo R.E.

Lest readers think I have an inordinate love of Cage’s music, I do discriminate. I prefer the music he wrote between 1933 and 1952, the dates encompassing his incomparable works for percussion -the core repertoire of modern percussion ensembles, the works for Prepared Piano and his 4′ 33″ the work he declared unto death to be his best. 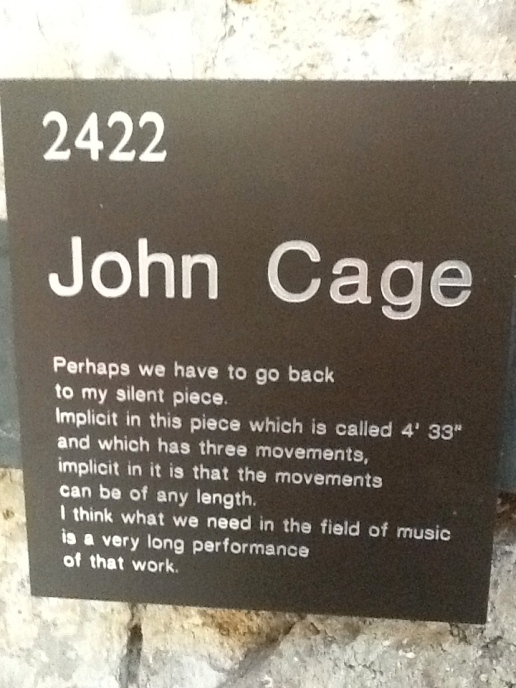 The Cage Projekt has not been without its critics. Zacher for instance said Cage never intended such a lengthy performance. The most recent sound changes to ORGAN2/ASLAP,   occurred on 5 July 2012. The next will occur on 5 October 2013. All score changes take place on the 5th day of the month in honour of Cage’s birthday. Organ pipes are added and or sbtracted to realize note changes and small bags of sand are hung on appropriate keyes to keep the tones audible. The organ will gradually be built as the work progresses. A generator buried under replicas of the original church organ bellows, sends a constant source of air to the organ pipes located across the trancept. 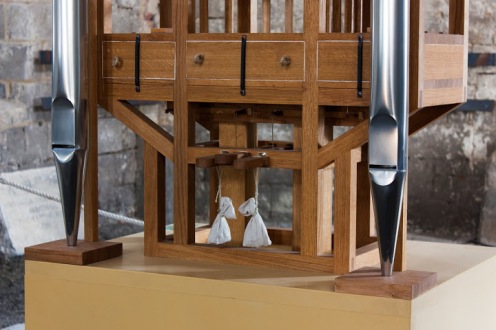 Replica of original bellows with ASLSP organ in the distance. photo, Rainer Sennewald

1,000 Euros will allow a donor to have a message inscribed on a metal plaque which will be  mounted below a year of their choice if available. The church guardian, a Polish man who came to Halberstadt some years ago and found himself unemployed, vetted a number of job advertisements and chose the ORGAN2/ASLAP job because “it sounded interesting”.  He is a delightful individual who loves the project under his care and has an understanding of Cage and his music that took me back a few paces. He knew the contents of the books for sale and was happy to answer questions. He said there were line ups on the weekends and a rather steady, but smaller flow on weekdays. When a change of notes takes place, St. Burchardi is packed.

Tourists are its congregation and as its organist, Cage plays a concert for the ages. 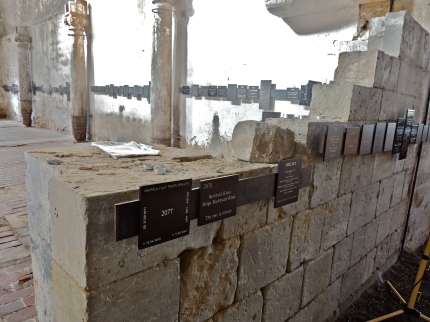