“Bottles” from Ghostbuster Cook:  The Origin of the Riddler (2011) Dan DEACON

Unfortunately, I won’t be attending. Just about the time they go on, I’ll be in the throes of a Morphine drip as I recover from a hip replacement operation just ten blocks from their venue. I’ve been on Morphine drips before and I can guarantee I’ll not be thinking of So Percussion or the Cactus below left I loaned them for their concert.

Nexus played Cage’s work for cacti in Amsterdam during a festival many years ago. At the end of the piece and before the applause began, someone in the audience cried out, “Bull Shit!”. Our next work was “Third Construction” and as we moved to our places, I replied, “Cactus Shit”. The morning newspaper review headlined Cactus Shit. Everything else was in Dutch, but  we were made to understand the review was favorable. ‘Twas well it was, as we had spent an entire afternoon the day before hand picking cacti that would accommodate our strip, adhesive mikes – think Band Aids.  The sounds were wonderful. 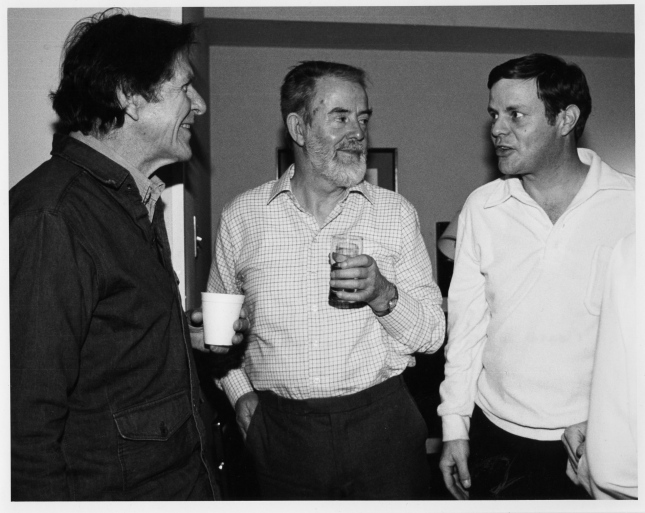 L. to R. John Cage, Paeder Mercier and R.E. after a ROARATORIO performance in Toronto, ca, 1979.

My wife and I have a small collection of cacti and looking at them everyday, I am reminded of Phil Nimmons, Canada’s iconic band leader, composer, arranger, clarinetist and frequent guest artist with Nexus who gave most of them to us. I also think of Cage and some of the experiences I shared with him over the years. During Prof. Robert O’Driscoll’s Celtic Consciousness Festival, I had the great pleasure of meeting Irish Harp player Grainne Yeats, who married Michael Yeats, a son of Irish poet William Butler Yeats (1865-1939). Together we played nine performances  of W. B. Yeats’ play  Cuhulain. The performances were rather strange, but Grainne and I hit it off and she proffered fascinating insights into her father-in-law’s work. Grainne was a marvelous harpist who thought we were playing far too much, but our director kept asking for more music. He was sure the play would fail and thought continuous music would save the play and him.

During the Celtic Festival, John Cage arrived with a band of Irish musicians for performances of his delightful ROARATORIO and Irish Circus. The drummers were Paeder Mercier and his son Mel. Paeder came to a Nexus rehearsal with Cage as we were learning a work written for us by Bruce Mather, Clos du  Vougeot.  Mather’s  music requires exquisite and continuous balance among parts and after we had finished Paeder  said, “It’s like being a bridesmaid”. I loved  this insightful comment and we became friends. He sold me an extra Bodhrán and gave me some preliminary lessons.

This was heady stuff for me because at the time Paeder was the Bodhrán  player for the very popular Irish band The Chieftains. And what a Bodhrán player he was – loose as a Goose and always in the pocket! He made those Irish tunes roll. There was a tune on one of the Chieftains recordings whose beat I couldn’t figure out so I wrote Paeder an inquiry. He wrote back saying, “That’s my secret beat. I’ll show it to you when you come to Ireland.”  Nexus did go to Liverpool and Paeder crossed the Irish Sea from Dublin to meet me. When he registered at the hotel there was a message waiting for him saying his brother had just died. Paeder went back to Ireland and I never learned his secret beat. Sadly, a few years later Paeder was himself dead.