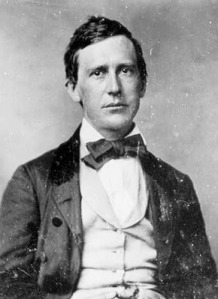 “Beautiful Dreamer,” Stephen Foster’s last song, was published posthumously a hundred and fifty years ago this month. On March 4, 1864, the Confederacy adopted the Stars and Bars as its official flag, and Sherman began planning his March to the Sea. Foster had died two months earlier, on January 13th, in New York City. Penniless, sick, and alone, having sold even the clothes off his back for liquor, he fell while shaving in a flophouse on the Bowery, gouged his head, and died days later, in Bellevue Hospital. He was thirty-eight years old.

His songs, wildly popular in the antebellum U.S., and, remarkably, wildly popular still, gave us some of the most powerful iconography of the South: “Way down upon the Swanee River,” from the song “Old Folks at Home” (1851); “My Old Kentucky Home” (1853); “I’ve come from Alabama with a banjo on my knee,” from the song “Oh, Susanna” (1846); and on and on. Foster never saw Kentucky or the Suwannee River or Alabama, and had been south of the Mason-Dixon Line only once, for his honeymoon, on a steamboat trip down the Mississippi to New Orleans. Which is to say that Southern nostalgia was, in part, invented by a Yankee who spent almost no time in the South, long before the South was even something to be nostalgic about. Alabama and Florida were still very young states; slavery and plantations had replaced Native American territories only about forty years before the Civil War.

Foster was also America’s first professional songwriter. He was born in 1826 to a well-to-do family in Western Pennsylvania, (Lawrenceville near Pittsburgh) near the racetrack where his song “Camptown Races,” of “doo-da, doo-da” fame, is set. (An informal survey shows that everyone, Northerner or Southerner or otherwise, thinks that the Camptown Races must be in the South.) Foster learned his craft from two very different men: Henry Kleber, a classical musician who was his music teacher, and Dan Rice, the famed comic and blackface performer, from whom Foster learned the art of the minstrel song. (Last month, Richard Brody wrote about the use of minstrel shows in “I Dream of Jeanie,” a rarely seen bio-pic of Foster directed by Allan Dwan.)

This was in an age of total confusion when it comes to music publishing and copyright and fair use. Apart from sacred, patriotic, and “classical” music, published popular songs were written either by gentleman amateurs in the English tradition (the first American pop song is, by legend, Francis Hopkinson’s unmemorable song of 1788, “My Days Have Been So Wondrous Free”) or by performers in need of material, like Rice and countless others. The money came from performances, and so there was no tradition or legal precedent for how royalties from songwriting alone would be made. ASCAP, the American Society of Composers, Authors, and Publishers, was not formed until nearly fifty years after Foster died, prompted in part by the legend of his struggle and his death, with only a few cents in his pocket.

Foster worked heroically to turn songwriting into a profession, but he never made much money from his songs, even after he moved to New York, in 1860, and the Civil War had brought patriotic tunes to the height of popularity. A letter that Foster wrote to the manager of Christy’s Minstrels, in 1851, shows the efforts he made:

I have just received a letter from Messrs. Firth, Pond & Co., stating that they have copyrighted a new song of mine, but will not be able to issue it yet, owing to other engagements. This will give me time to send you the manuscript and allow you the privilege of singing it at least two weeks and probably a month before it is issued. If you will send me $10.00 immediately, I pledge myself as a gentleman of the old school to give you the manuscript. This song is certain to become popular as I have taken great pains with it. If you accept my proposition, I will make it a point to notify you hereafter whenever I have a new song and send the manuscript to you on the same terms, reserving to myself in all cases the exclusive privilege of publishing. I make this proposition to you because I am sure of the song’s popularity.

“This song is certain to become popular as I have taken great pains with it.” Foster’s assurance (at age twenty-four) is extraordinary, but possibly deserved. Historians now credit him with having pretty much invented the American pop song in its purest form: the bastard stepchild of the parlor song and the minstrel song, of the European and African strains of American music. If the goal of folk traditions is authenticity, then this music is deeply, even proudly, inauthentic. His first hit, “Oh, Susanna,” has a military melody reminiscent of “Yankee Doodle”; a rhythmic profile that owes everything to the polka, which immigrants brought from Central Europe in the eighteen-forties, and which swept the country; and a lyric that is still astonishing in its combination of catchy nonsense and unabashed racism.

“Oh, Susanna” is sung from the point of view of an African-American man, apparently free and wandering with a banjo from Alabama to Louisiana (in 1846!). He sings in a thick dialect that is Foster’s own invention, and the second verse, which is never sung today, contains the unforgettable line:

I jump’d aboard the Telegraph and trabbeled down de ribber
De lectrie fluid magnified and kill’d five hundred Nigger.

The song was premièred, like so many of Foster’s songs, by white singers in blackface. In Pittsburgh, Christy’s Minstrels were a popular Northern white blackface minstrel troupe, performing “Ethiopian” melodies that, as Edwin Pearce Christy put it, delineated the “ludicrous popular negro character.” In spite of—or, probably, because of—these potent and problematic elements, “Oh, Susanna” was a shattering hit, in part because of steam. The Telegraph in Foster’s lyric is a steamboat, and the steamboat, the steam-engine railroad, and the steam-powered rotary printing press all allowed music to be disseminated farther and in far larger quantities than ever before. And the national turmoil about race, slavery, and the future of the Union made songs like “Oh, Susanna” simultaneously provocative (it is sung by a black man) and comforting to whites (it is written by a white man, and the man in the song is not trying to escape or rebel). Also, the tune is terrific, thanks to Foster’s gift for tune-making, or tune-reworking. (There is some controversy about the origin of the song.)

In any case, no American song had previously sold more than five thousand copies. “Oh, Susanna” sold more than a hundred thousand copies within a year. The forty-niners brought the song west along the new Oregon Trail, where it became, inexplicably, the anthem of the California gold rush. All over the country, in the North and the South, people bought the sheet music, a nascent form of the mass popular culture that blossomed in the United States after the Civil War. Since then, Foster’s songs have become part of America’s cultural bedrock. “My Old Kentucky Home,” a very beautiful parlor melody with a lyric about a slave’s nostalgia for the plantation he can never leave, is the state song of Kentucky. Here is the former Governor A. B. (Happy) Chandler singing “My Old Kentucky Home” at a University of Kentucky Basketball game:

There is an interesting parallel between Foster and Dan Emmet. Concurrently they both composed for minstrel shows, Emmett for Bryant’s Minstrels in New Yrfk City. Emmett was of partial North American Indian ancestry and a famous minstrel musician and actor. He played violin, mandolin, banjo and drums and was called out of retirement to help write the first U.S. Army approved self-instructor for drums and fifes in modern notation. In 1859 Dan Emmett is believed to have composed “I Wish I Was In Dixie’s Land” “ (“Dixie Land”)

See however, Sacks, Howard L. and Judith Rose Sacks; “Way UP North in Dixie”, Smithsonian Institution Press, Washington, D.C., 1993. The Sacks present compelling evidence against Emmett’s authorship of Dixie. They suggest a family of black musicians living near Emmett, and with whom he made music, composed the work and taught it to him. Ay any rate, Emmett, like Foster, died in poverty.