One of my  friends in high school was Robin Ridington, now Professor Emeritus of Anthropology, University of British Columbia. He and Jillian Ridington do research with the Dane-zaa tribe of northern B.C. [1.] Robin was a school brain, high marks in everything, editor of the school paper and curious. He invited me to his home one day where we stuck our heads in a mammoth bass reflex speaker to hear a recording by E. Power Biggs on an organ with 32′ bass stops. We read instructions on rappelling and drove around Carroll County, Maryland in a giant Buick station wagon owned by his father, looking for cliffs high enough to test our book learning. Then Robin suggested we  join the  National Speleological Society. He wanted to attend a meeting of its Baltimore “Grotto” or chapter – he was never a half way guy, but I wanted to find a cave.

We purchased rope, carbide lamps, carbide pellets, helmets, overalls and boots, the basic accutrements for caving. All this stuff was stored in the back of  the station wagon. I can remember the caves we explored, I just can’t remember the order in which we explored them.  We referenced  Virginia and West Virginia state geological surveys which gave detailed instructions on the location of wild, not commercial caves, along with interior maps.

I know we went to the entrance of School House Cave in West Virginia. School House is famous. To explore this cave, mountain climbing techniques and equipment are required. It’s a linear cave consisting of a series of pits hundreds of feet deep, each pit having perpendicular walls. These pits are separated by a few yards of managable ground near its top or roof. That’s why Robin and I went no further than the entrance. To this day I can recall the feeling of unease I experienced as I approached the slope to the first drop into blackness. The most I can say is, “I was there.”

Another cave in West Virginia was called Licking Creek.  Robin and I drove in the mountains on narrow dirt roads, moving ever deeper into the forests, but according to the geological survey, ever closer to the caves location. A small cottage appeared. We stopped to ask for directions. I knocked on the front door and was greeted by a woman who looked to be in her 40s.  I asked, “do you know where Lickin Crick Cave is?”. She looked at me for a moment and said, “do you mean Licking Creek Cave?”     I was thoroughly humiliated by my attempt to speak what I had assumed to be Appalachian English. “Yes”, I said. She gave me directions. The cave entrance was nearby in the corner of a hardscrabble farm.

Our scariest adventure was Hedricks cave in West Virginia which was known to connect with Organ cave that was open to the public on a commercial basis.  We went on for hours and hours expecting to come out to a lighted commercial cave but finally realized that wasn’t going to happen.  Robin dropped a boulder on his foot.  We were almost stuck in a crevice passage and behind us leading back to the Hedricks entrance was a brutal long low room that had to be negotiated at a crawl or worse.  Robin had a moment of meltdown but finally we made our way back to the entrance, where a light snow was falling.  We ended that long day in a motel with Robin’s foot red and swollen.[2.]

Then, there was the cave in Harper’s Ferry, West Virginia. I think it was called George Washington Cave. Robin and I asked our girlfriends to  accompany us and during the drive we amused ourselves by reading aloud the rhymes on Burma Shave signs.[3.] Arriving at mid-day we found ourselves to be alone in a virtual ruin. My wife and I cannot remember any of the domestic dwellings visible in the photo below, including the church. Though mysteriously quiet and completely deserted, someone had been at work boarding up doors and windows. Famous in American history yet seemingly uncared for, Harper’s Ferry was then a site for ghosts.

Harper’s Ferry, West Virginaia today. The Armory and other Civil War Military buildings are nearest the river on left.

Prior to the war between the states, Harper’s Ferry, which occupies a militarily and commercially strategic point at the juncture of the Potomac and Shenandoah Rivers, had served as an United States military arsenal and armory. Kansas abolitionist John Brown aided by 19 men including freed slaves, captured the arsenal from a small and unprepared garrison of US Army soldiers. The Federal government sent Colonel Robert E. Lee and his chief of staff Lieutenant J.E.B. Stuart to recapture the arsenal.

The four of us slowly walked among the decaying structures and headed out along old, unused railroad tracks towards the cave we hoped to find. After a short walk its opening appeared above a weedy slope. The cave proved to be littered with trash and very small. A bit of a downer. How George Washington’s name became attached to this bit of granite and limestone was a mystery. [4.] However, having girlfriends with us made everything more exciting, new and full of prospects. This also happened to be the second date for me and my future wife. Later Robin took our photo as we posed in front of a boarded doorway.

Many years later my wife and I revisited Harper’s Ferry. We drove the narrow  wooded road from Antietam battlefield, the route Longstreet and his corps had taken from Harper’s Ferry to join Lee.  In 1957, Harper’s Ferry possessed a powerful allure. Its old weathered buildings made history palpable.

Now a large asphalt parking lot had been added and we had to await a shuttle bus to take us onto the site. The decrepid wooden buildings had been restored and newly painted. Now Harper’s Ferry was a too convenient tourist stop with clean toilets and a gift shop. We couldn’t locate ourselves on the map we’d been carrying in our heads for the last forty years. We never got around to George Washington Cave. We looked for, but were never sure we’d found the doorway where we posed for our photo many years before. Just as well. Our Harper’s Ferry had been comandeered by the National Park Service.

We dismissed this new reality and returned to our original more romantic version. It remains in our minds to this day.

[1.] Three interesting books by Robin and Jillian recount their research and experiences with native people.

When You Sing it Now, Just Like New: First Nations Poetics, Voices and Representations, Robin Ridington and Jillian Ridington, University of Nebraska Press, Lincoln and London, 2006.

[2.]  Robin Ridington wrote this paragraph on Organ/Hedricks Cave . Both he and Jillian enlarged and clarified other details in this article. My thanks to them both.

[3.] Burma Shave road side ads were a popular form of amusement for automobile travelers from 1927 until 1963. The signs generated huge sales and became a fixture of American life. Each line of a rhyme was posted on its own sign, spaced to facilitate reading at speed. Here’s one from 1955:

[4.] US Army  Captain Washington and a civilian named Washington were among John Brown’s hostages in Harper’s Ferry. I’ve yet to discover a connection between the cave and either of these men. (R.E.) 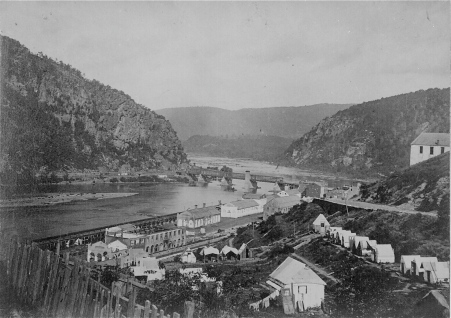 Harper’s Ferry during the Civil War. Without the army tents, it appears as my friends and I found it in 1957. 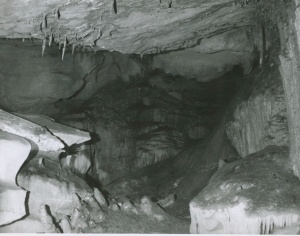 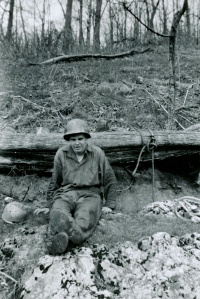 Posted by robinengelman on July 9, 2013 in Articles, Commentaries & Critiques, History